The Taj Mahal: its architecture, origins, construction, interiors and surroundings. 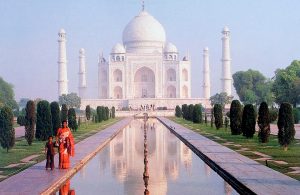 The Taj Mahal was built in the 1630s by the Mughal Emperor, Shah Jahan as a mausoleum for his favourite wife, Mumtaz Mahal.

The lecture traces the origins of its design, its site in Agra, how it was built, the craftsmen, the interiors and the surrounding buildings and gardens.

He was educated at Cam

bridge University and following service in the Foreign Office he was Assistant Private Secretary to The Prince of Wales, 1978-80 and then Private Secretary to Diana Princess of Wales 1981-83.He was the librarian at Windsor Castle and is now Librarian Emeritus. He wrote the guidebook and audio tour on Windsor Castle. He has written articles, contributed to books and advised on a history T.V. series.